On November 5, Good Data Corporation launched the rankings of non-drama TV exhibits and forged members that generated essentially the most buzz from October 28 to November 3.

The rankings are based mostly on on-line articles, weblog posts, neighborhood boards, social media posts, and views on video clips for 185 non-drama TV packages which might be presently on air or scheduled to air quickly.

Mnet’s competitors program “Queendom” grabbed the No. 1 spot for the seventh consecutive week with the opponents’ final performances. (G)I-DLE was in a position to rank No. 2 on Good Data Corporation’s rating of non-drama TV present clips for this week, and Oh My Girl, MAMAMOO, (G)I-DLE, and Lovelyz positioned No. 2, No. 3, No. 4, and No. 10, respectively, on the rating of non-drama forged members.

MBC packages “My Little Television 2,” “I Live Alone,” and “PD Notebook” took the No. 3, No. 4, and No. 5 spots, respectively, on the listing, with Kyung Soo Jin getting into the rating of non-drama forged members at No. 5 for her look in “I Live Alone.”

KBS2’s “The Return of Superman” got here in at No. 6 on the listing after it was introduced that KBS could be undergoing changes to their selection present time slots with the return of “2 Days & 1 Night,” whereas JBTC’s “Ask Us Anything” positioned No. 10.

Meanwhile, Ha Sung Woon rose 25 spots to No. 1 within the rating of the non-drama forged members that generated essentially the most buzz for his look in Sky Drama’s “We Play.” Kim Gun Mo debuted at No. 6 on the rating after showing in “Master within the House” and rose 400 spots to No. 7 along with his mom’s return to “My Ugly Duckling” attributable to his current marriage announcement.

The high 10 buzzworthy non-drama TV exhibits of the week are:

The high 10 buzzworthy forged members are as follows: 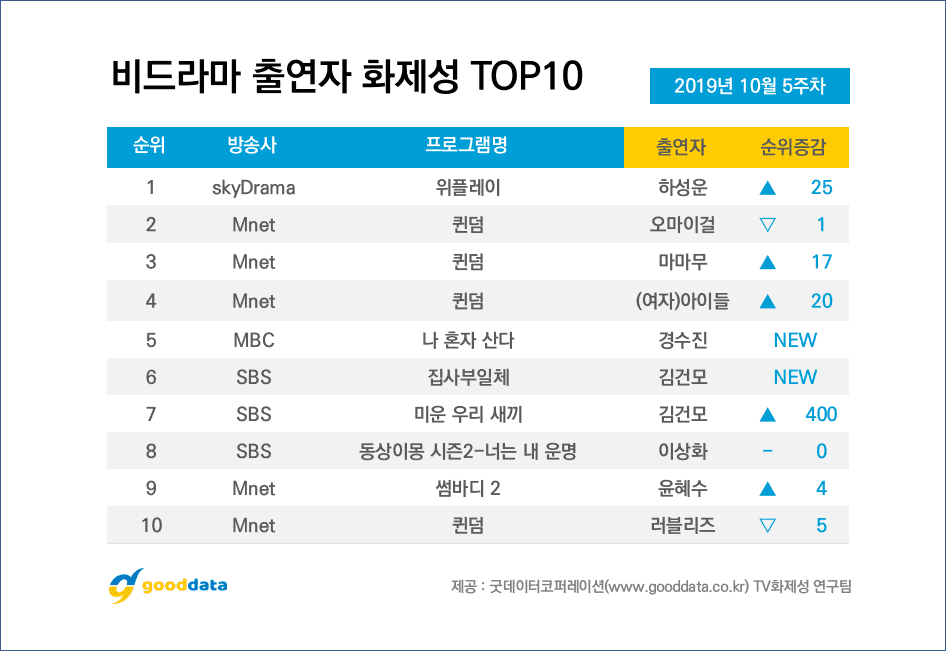