BTS Breaks Gaon Chart Record For 1st-Week Sales With “Map Of The Soul: 7”

BTS has achieved the very best first-week gross sales in Gaon Chart historical past with their newest album!

On February 27, the Korea Music Content Association (the group behind Gaon Chart) introduced that BTS’s “Map of the Soul: 7” had topped Gaon’s album chart for the week of February 16 to 22—regardless of solely having been launched on February 21 at 6 p.m. KST, on the very finish of the week.

The KMCA formally said, “BTS’s ‘Map of the Soul: 7’ has charted at No. 1 [on the Gaon weekly album chart] with the very best first-week gross sales in Gaon Chart historical past.”

Although the KMCA didn’t present a precise determine for the album’s complete gross sales for the week in keeping with Gaon Chart calculations, “Map of the Soul: 7” racked up 2,667,293 factors on Gaon’s weekly retail album chart alone. (Not to be confused with the general weekly album chart, the retail album chart is a separate chart that solely contains home offline retail gross sales of albums.)

Gaon Chart will launch additional data on BTS’s album gross sales on the finish of the month, when it releases its month-to-month chart knowledge for February.

Congratulations to BTS on their spectacular achievement!

Check out the highest 5 for every of this week’s Gaon charts under:

New releases dominated this week’s bodily album chart: BTS’s “Map of the Soul: 7” debuted at No. 1, adopted by IZ*ONE’s first full-length album “BLOOM*IZ” at No. 2. (The Kit model of “BLOOM*IZ” additionally charted individually at No. 5.) DreamCatcher’s “Dystopia : The Tree of Language” debuted at No. 3, whereas LOONA’s “#” shot up the chart to say No. Four for the week.

IU’s “I Give You My Heart” (from the OST of “Crash Landing on You”) achieved a double crown on this week’s charts, topping each the general digital chart and the streaming chart. 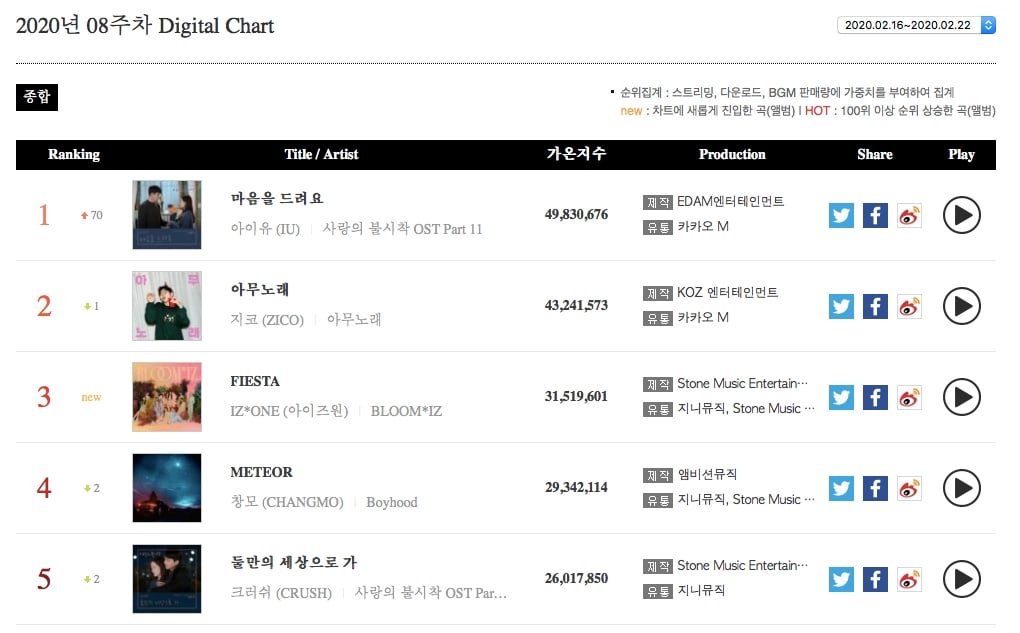 IZ*ONE’s “FIESTA” debuted at No. 1 on this week’s digital obtain chart. BTS took three spots within the prime 5 with songs from their new album: their title monitor “ON” debuted at No. 2, whereas “Zero O’Clock” and “Filter” entered the chart at No. Four and No. 5 respectively. Finally, IU’s “I Give You My Heart” took No. Three for the week. 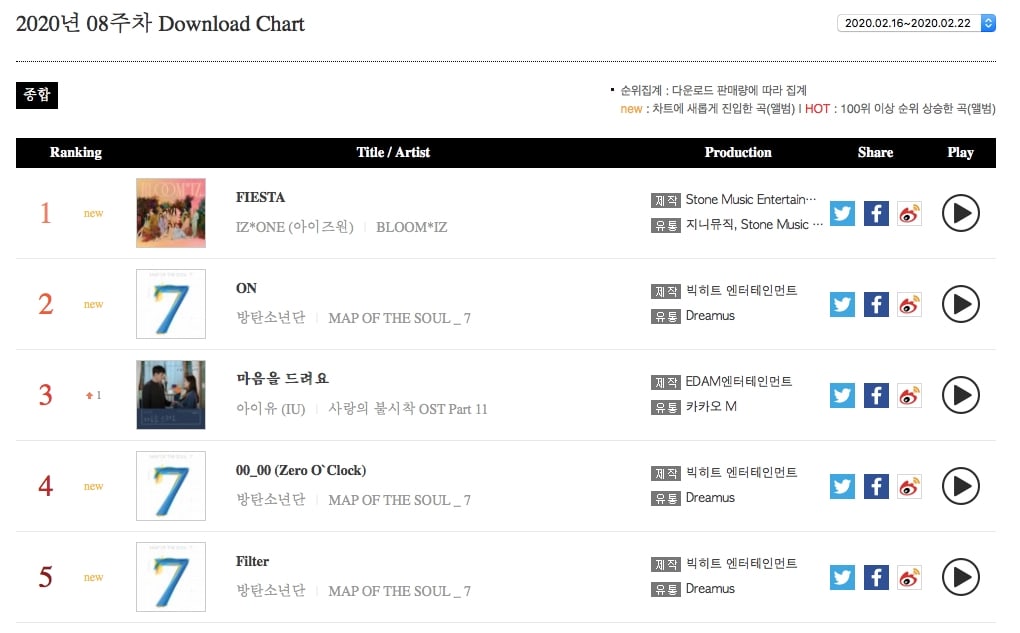 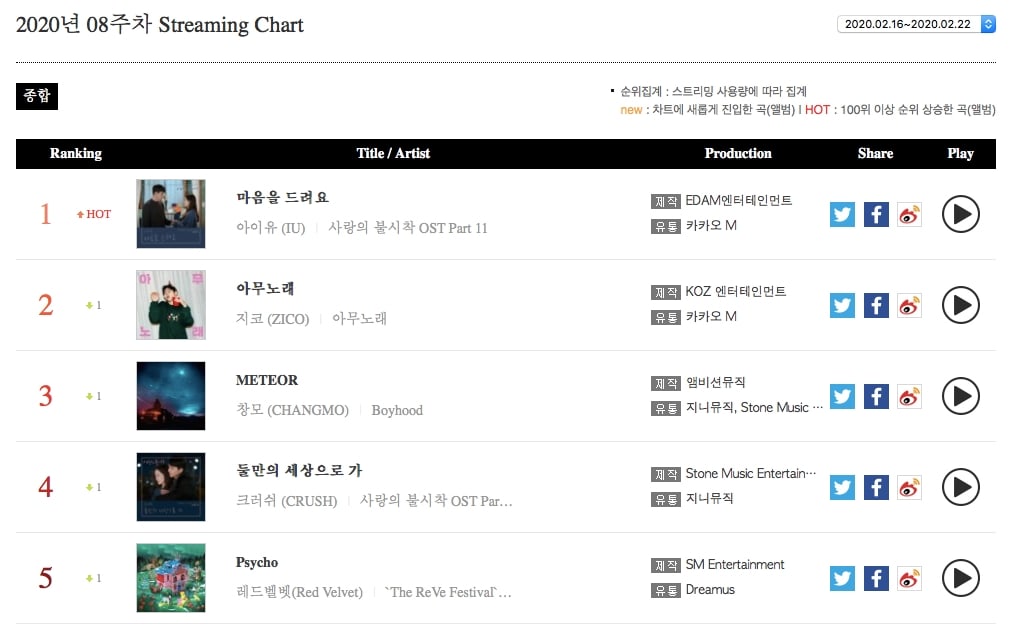 BTS continued their reign at No. 1 on Gaon’s Social Chart 2.zero this week, whereas BLACKPINK equally held onto their spot at No. 2. GFRIEND rose to No. Three on this week’s chart, adopted by IZ*ONE at No. Four and EVERGLOW at No. 5. 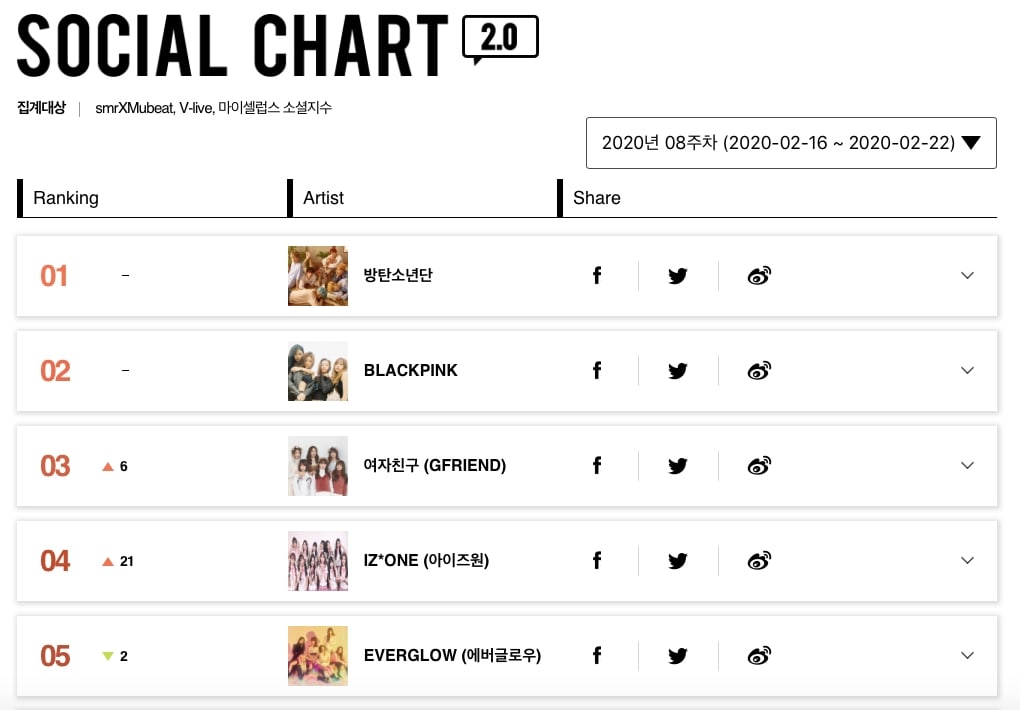 0
Kush has returned to the music scene together with his personal label. According to TV Report, Kush joined forces with producer DM and established...
Read more
Music

0
Kang Daniel is again! On March 24, Kang Daniel launched his first mini album “CYAN” and the music video for his title monitor “2U.”...
Read more
0